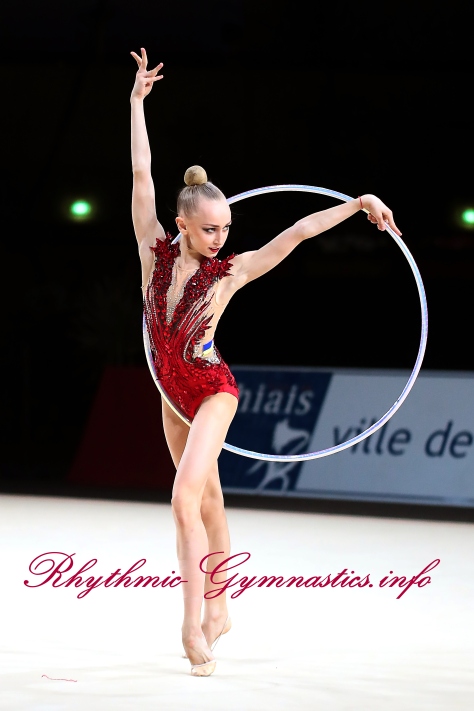 Viktoriia Onopriienko is the current Ukrainian Champion and vice-champion of the European Championship. Last week, she answered many questions and also thanked everyone in a Livestream conversation on Instagram with her fans.

How did you get into the national team?

I joined the National Team after National Championships of Ukraine, in Sumy in 2016. We did a group exercise and 4 individual exercises. After this, they called my coach and said that Irina Ivanovna Deryugina wanted to see me. The next day we arrived at the October Palace. Anna Rizatdinova, Victoria Mazur (the leaders of the current past National Team) were there. My heart just jumped out of my chest. Irina Ivanovna asked me to warm up and show off my exercises. She wanted me to be in the National Team.

I really liked the exercise with the ball “Fever”. This year I like all my exercises, but I would highlight last year’s exercises with a ribbon and clubs.

– How long does your training last?

The first training session starts at 9-10 am and we work out for an hour or two. Then we have a break. The second workout depends on how we are released, usually until 7-8 pm. In general, we train 8-10 hours a day. Sometimes we also have one training session on Saturday.

How hard was for you to get back in shape after quarantine?

It was quite hard, especially to prepare yourself for the Ukrainian Championship. During the quarantine we also had to work out.

Which are your favorite gymnastics element?

I have no favorite elements, but my top elements, as they say, are ring balance and back balance.

Do you prefer unitards or leotards?

I have both, even leotards with or without a skirt. 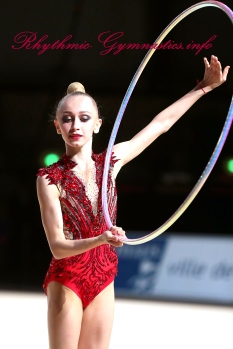 Have you ever thinked about stop doing gymnastics?

Yes, in the past when the workload increased in training, and I began to take part in competitions more often. At the same time I also went to school and I was very tired. My parents help me a lot, they know how to motivate and support me.

Who is the strictest coach in the national team?

All our coaches are strict in their own way.  We have good behaviour to all the coaches and we have mutual understanding.

What do you do in your free time?

My favorite hobby is cooking.

If you could remove or add some rules in rhythmic gymnastics, what would it be?

I would like to add more elegant movements. According to the rules, there is a lot of work with the apparatus and, I would like to relieve this a little bit, so that the emphasis of the exercise focuses in the artistry.

Which are your plans for the future?

So far, the future for me is the Olympic Games. I really want to represent the Ukrainian National Team at the Olympics and raise up the flag of our country.

Do you speak Ukrainian? Which language do you use more: Russian or Ukrainian?

My whole family speaks Ukrainian. At home with my parents I speak Ukrainian, but in trainings I prefer to speak in Russian.

In which country did you like to perform the most?

Spain. Spanish fans adore this sport,  especially gymnasts from Ukraine. They really like our school, our performances and exercises.