Since 2013, when she became a national team gymnast, Yana Kudryavtseva won almost everything: European Champion All Around in Baku 2014, World Champion, European team Champion and a bunch of tournaments and Grand Prix Series.

“I wouldn’t actually say that my main goal is to win: I just want to perform a good competition and listen to the advices of my coach. I need to work hard and train smart: there’s no other secret to become the winner. When I am not leading the competition, it makes me work harder” 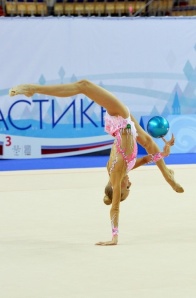 “I find competitions easier than training. Even if the competition is not going very well for me, nature helps me do my best. When I am not leading the competition for the first moment it is even easier for me, because it makes me work harder”

“I find competitions easier than training”

“I remember that long time ago I was training and spinning the ball on a finger. My coach, Elena Karpushenko found it interesting and said I should work on this movement, because it could become my signature element”

“She is very kind and stubborn at the same time which I think is great for sports. She has also a competitive nature. I could say she is an angel with iron wings”